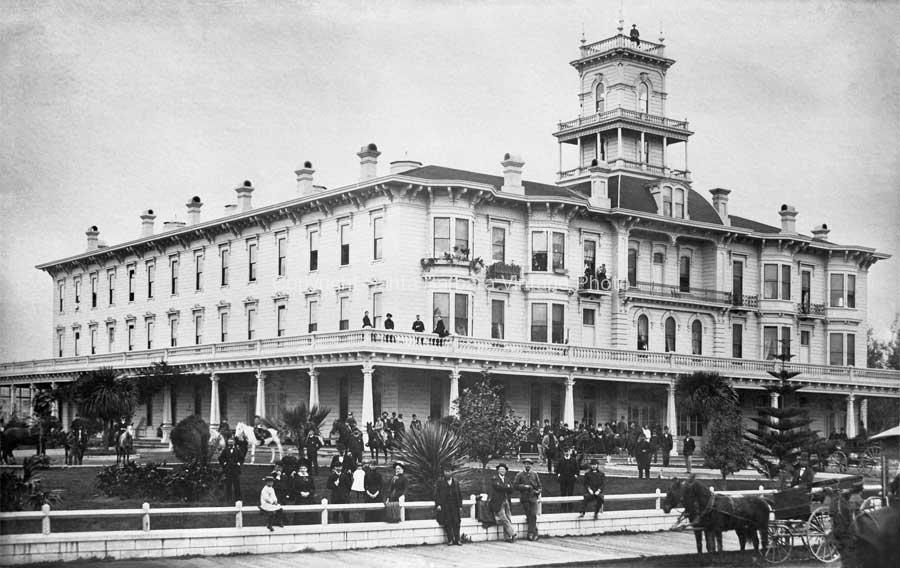 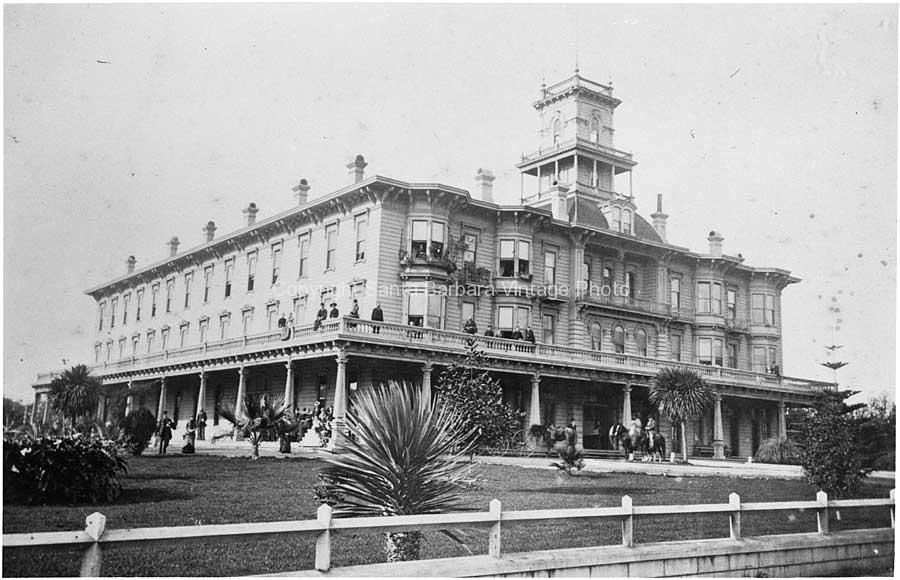 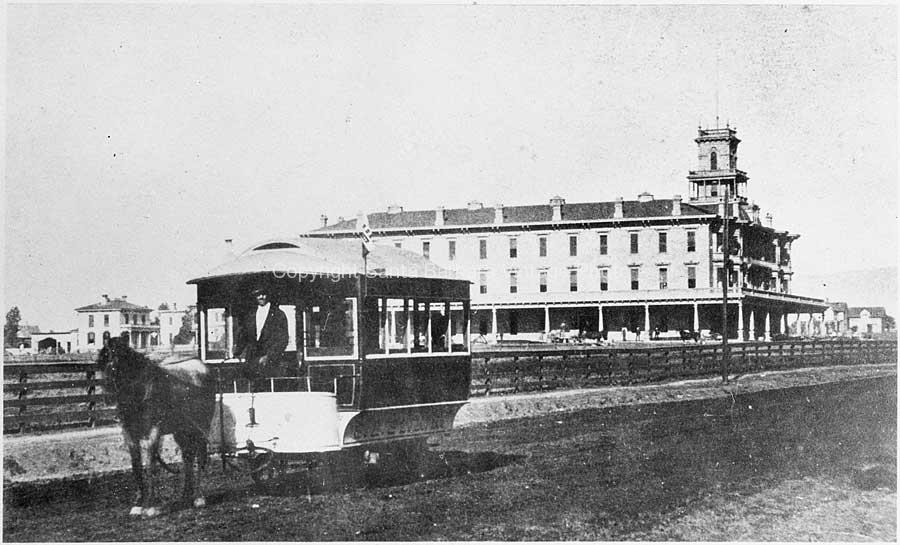 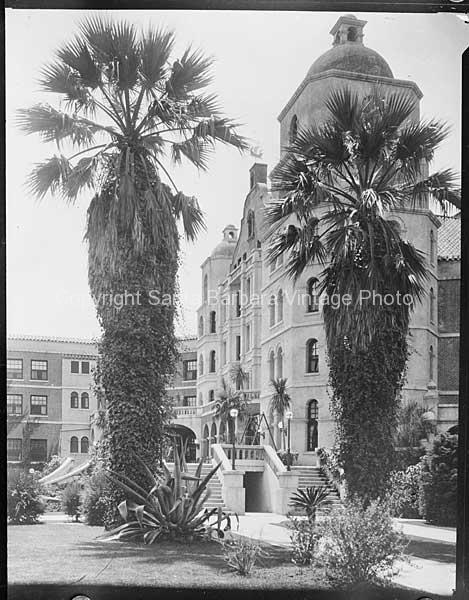 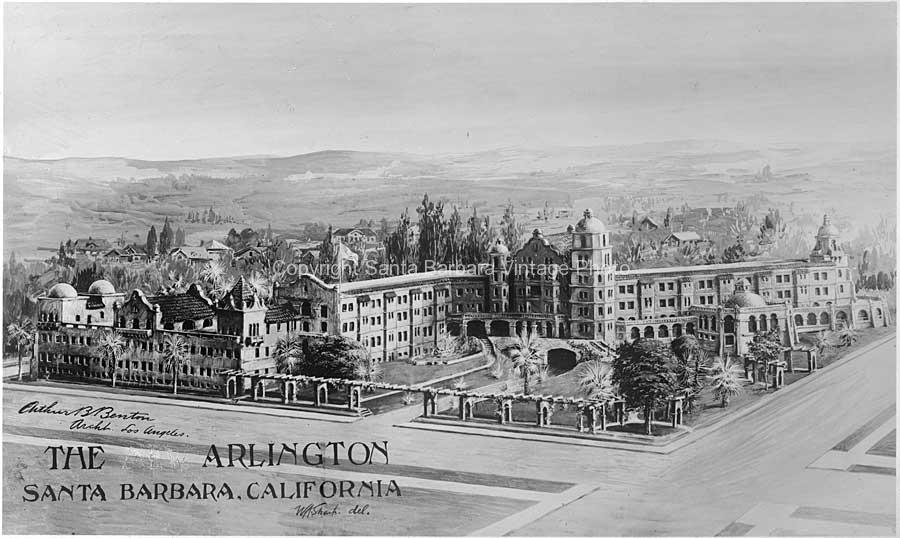 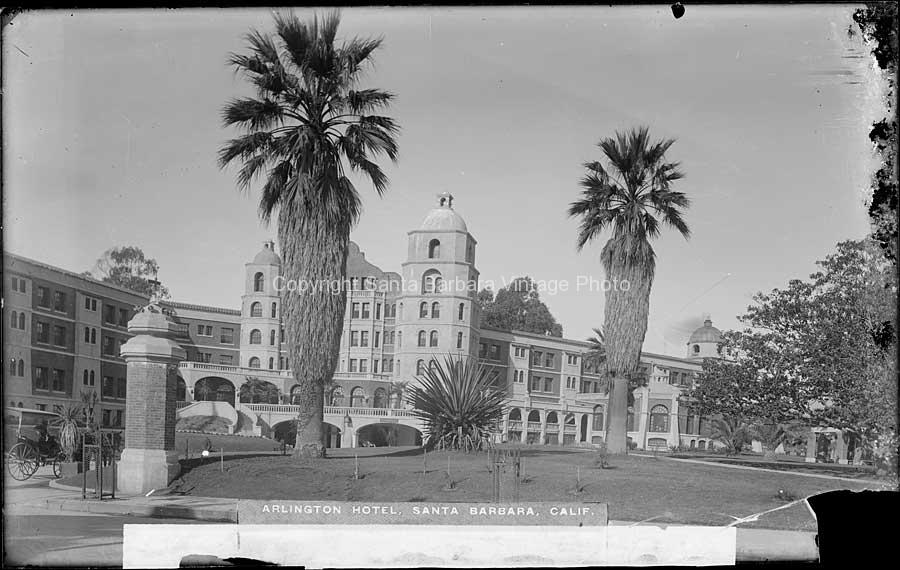 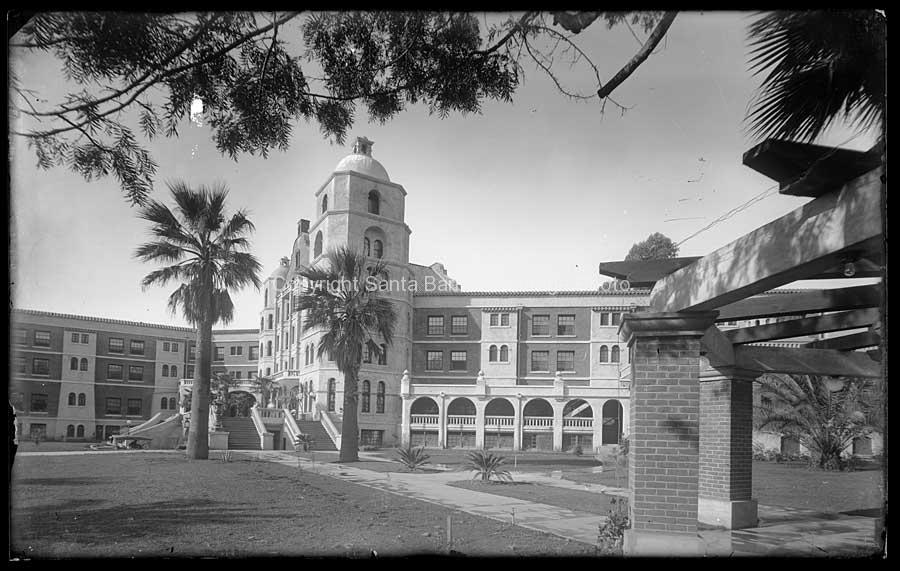 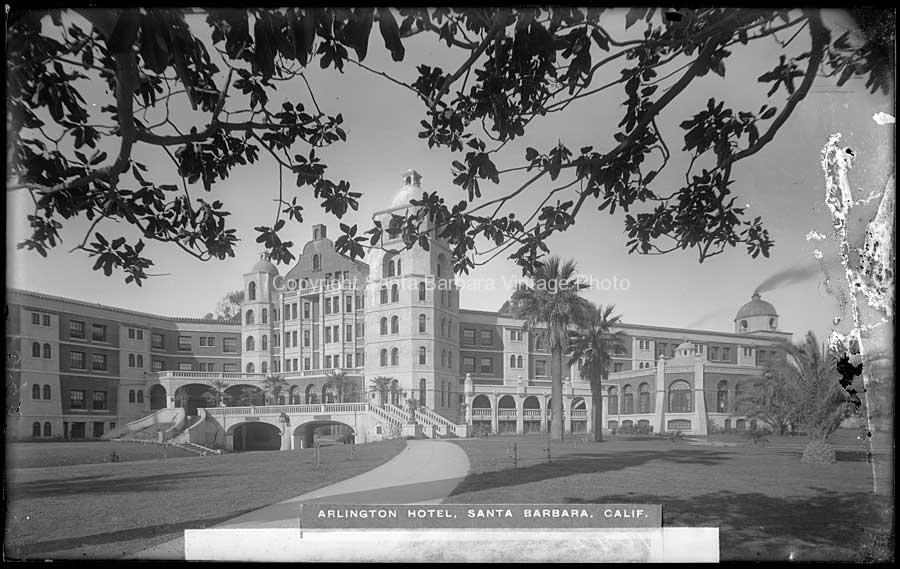 The three-story, 90-room hotel was a jewel along Santa Barbara’s State Street, between Sola Street and Victoria Street. It played host to presidents, kings and queens.

But on a Sunday night, while most of the visitors were out at dinner, a fire broke out. It burned throughout the night, and at daybreak only the Arlington’s chimneys were standing.

Amazingly, no one was killed.

The Arlington Hotel was rebuilt, but in 1925, an earthquake brought it back down.

In 1931, another “Arlington” opened. This time it was a theater. The Arlington Theater thrives to this day, regularly hosting films, concerts, and social events.

The Arlington Hotel was once among the most beautiful and intriguing of all the architectural wonders in Santa Barbara. Actually, both versions of the Arlington are worth the attention of design enthusiasts.

In order to understand the significance of the Arlington Hotel, we need to look at its design in the context of the more than 100 years of its history. On August 15, 1909, the original Arlington burned to its foundations on its sumptuous 5-acre grounds. A centerpiece in the lives of Santa Barbara’s elite from the 1870s up until its demise, the 90-room hotel on State Street had hosted visits from three presidents, numerous world dignitaries, and a host of upper-class Americans.

Some sources say that on the night of the fire, most of the guests were out to dinner. Those who remained in the building frantically rushed to escape, and no one died in the fire. Other local sources say that Robert Klein, the elevator operator, died of a heart attack after remaining at his post to ensure that everyone was able to evacuate. However, at least one newspaper later stated that Klein was found starving and ill in Berkeley, recounting the story of his legendary past. In any case, by the morning of August 16, all that remained of the elegant outline of the Arlington were its chimneys.

Benton and the Mission Revival style

However, in 1911, a new Arlington arose to cover an entire city block on the foundation of the old one. The new building, designed by Los Angeles architect Arthur B. Benton, was fashioned in the Mission Revival style with a stunning arrangement of bell towers around its five-story-high central structure. At a cost of $1.5 million, it was meant to honor and surpass its lavish predecessor. Benton determined that a fire would never destroy the Arlington again, and he incorporated then-state-of-the-art safety elements, such as concrete, brick, and steel, into the 250-room complex.

The renovated building was a stunning example of Mission Revival style. Benton’s “new” Arlington represented an attempt to reclaim the artistic and cultural heritage of the old Spanish Mission period. Recent generations neglected to care for the missions, and architects like Benton hoped to pay homage to the style while adapting it to contemporary life. His version of the Arlington offered a façade that used the best and most distinguishing features of the Mission period –red roofs, plaster walls, and the delicate tracery of the bell towers. Among its modern amenities was a convenient underground parking garage. Benton incorporated design elements from the old missions located in Carmel, San Gabriel, and San Juan Capistrano into his plans for the Arlington.

The second Arlington, like the first, was the victim of a natural disaster. On the morning of June 29, 1925, the residents of Santa Barbara woke up to find their city’s foundations rocking, rolling, and grinding together in a way that one eyewitness described as sounding like millions of dogs tearing into millions of bones. The initial 19-second quake, estimated today at 6.3 on the Richter scale, was followed by several aftershocks over the next 20 minutes. Seismologists believe that the quake was most likely centered on the Mesa Fault.

The community quickly rallied. Due to the bravery of three engineers who remembered to cut electrical power and gas to the city, Santa Barbara was spared a fire like that which devastated San Francisco after the 1906 earthquake. Most of the damage centered on State Street and the rest of downtown. The Arlington was hard-hit, and two guests lost their lives. Twenty-two-year-old Bertram Hancock had just driven up from Southern California in his shiny roadster to meet his father at the hotel. He was killed in his sleep, when the water tank resting atop the bell tower that housed his luxury suite collapsed through the roof. In the room below him, 83-year-old Edith Forbes Perkins perished in front of her maid’s eyes when the 50,000-gallon tank continued its trajectory, crashing through her floor and taking her with it. Hancock’s father later remembered being violently flung through the air amid the horrific noises made by the destroyed walls, timber, and steel-beam construction that crashed down around them. Ironically, Arthur Benton had placed the water tank on the bell tower’s roof as a means of safeguarding the new Arlington against fire.

Benton designed two other buildings in the Santa Barbara area, the nearby Edgerly Hotel, which was built in 1913, and All Saints by the Sea church, located in Montecito, which was constructed in 1900. Benton enjoyed a highly successful career in Southern California as a leading proponent of the Mission style over three decades. He achieved renown as an intensely well-informed expert on the history of Spanish mission architecture in general, designing private homes and public buildings, including the Mission Inn in Riverside.

The Arlington Hotel is still around, but in yet another incarnation. The hotel was replaced on the same site by the Arlington Theatre, which opened in 1931. Local architects William Edwards and Joseph Plunkett designed it in the Mission Revival and Spanish Colonial Revival styles. Still in business today at 1317 State Street, the theater is the site of popular and critically acclaimed movies, comedy shows, live theater performances, and the Santa Barbara International Film Festival.